Quite a while back I picked up a M5StickC Plus but had not done anything with it. I have a Smart Citizen Kit that I’ve been using to track data in my office and at home, but had been wanting some kind of smaller sensor that I could place in multiple rooms of my apartment. A few days ago I decided to pick up a ENV III Hat and TVOC/eCO2 to pair with it for a quick prototype. 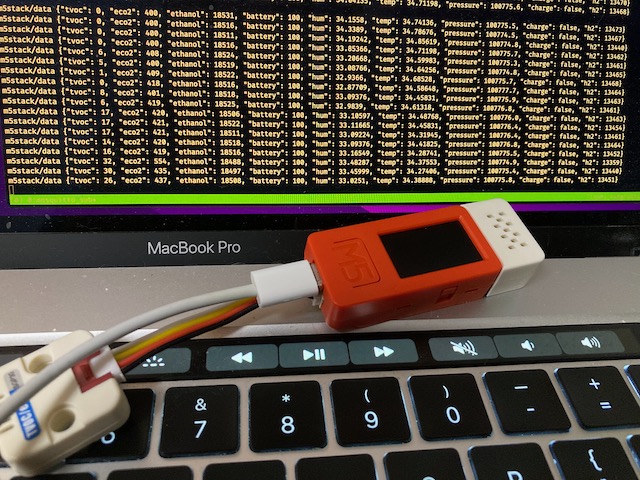 For my first draft, I decided to use their flow environment, but initially using their burner application was not working. Seems like there were some mismatched assumptions about the underlying OS, because I was getting some Python errors when trying to run the flash tool. Eventually I copied some of the flags from the console and then ran the esptool directly to get the M5Stick connected to their flow environment.

Once I had the device flashed, it was much easier to test their example code. After verifying that the sample code was working, it was then very easy to put together my own prototype.

At this point I could delete most of their code, and put together my own. I added a mqtt block to connect to my server, and then experimented with the various read values until I had my own json data being posted back.

I think my next attempt will be to take the same thing and use C just to make it smaller. A longer term goal would be to do something similar but that could more easily run on a battery. Also curious about their atom controller.